The Hundred: Gender-equality is more than spin 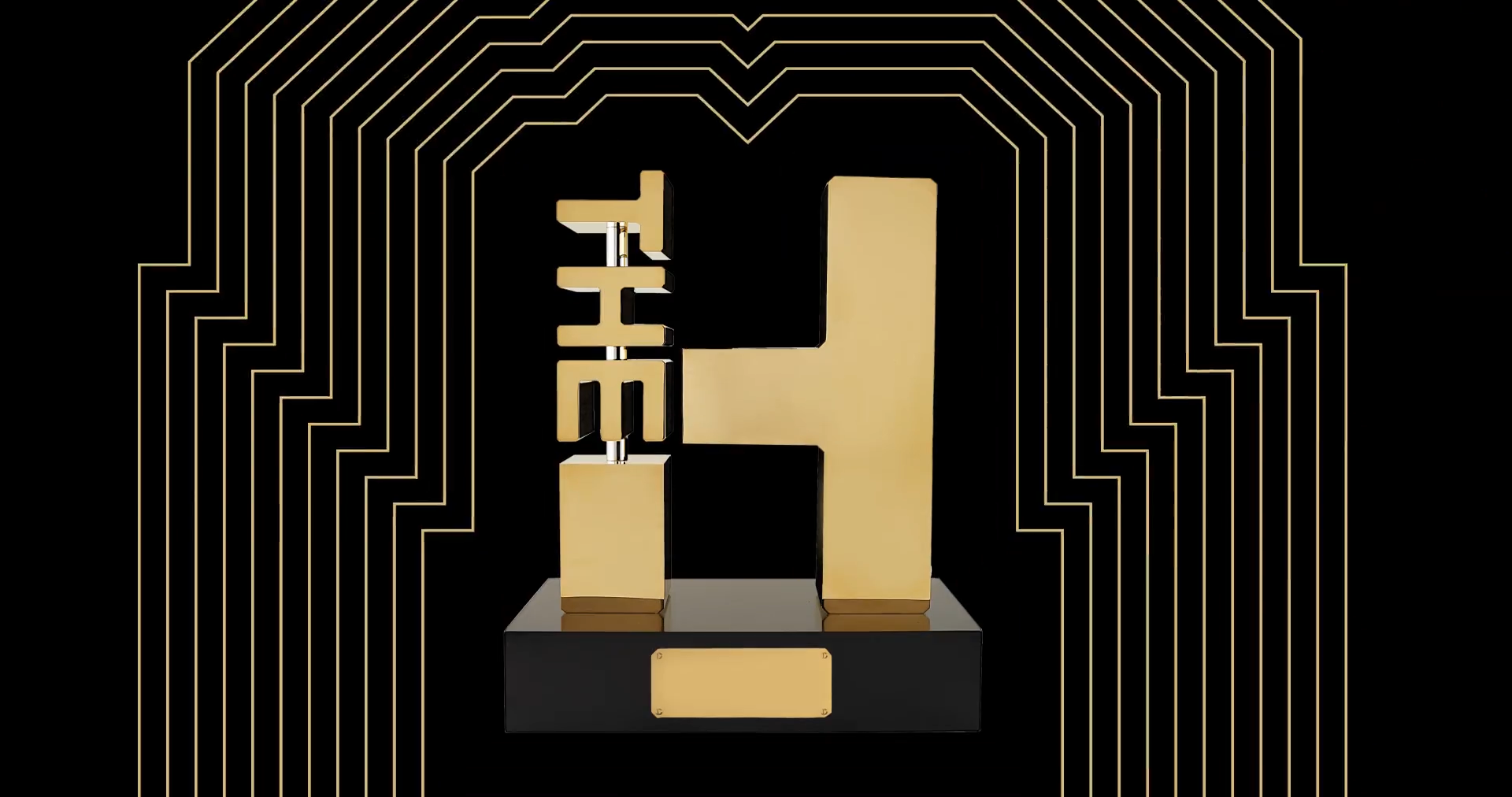 The Hundred is breaking new ground for English cricket, and Thomas Lyte are proud to be playing a part in a tournament that is also striking a huge blow for sporting equality.

With the tournament establishing itself as one of the most exciting elements of a packed English cricket calendar, The Hundred has already encouraged a whole new generation of talent to pick up a bat and ball for the first time.

Crucially, though, it has already help deliver a sizeable step-forward in the battle to ensure that the men’s and women’s games are seen as equal.

The identical winners’ medals, trophies, and prize funds for both eight-team competitions are testament to that. 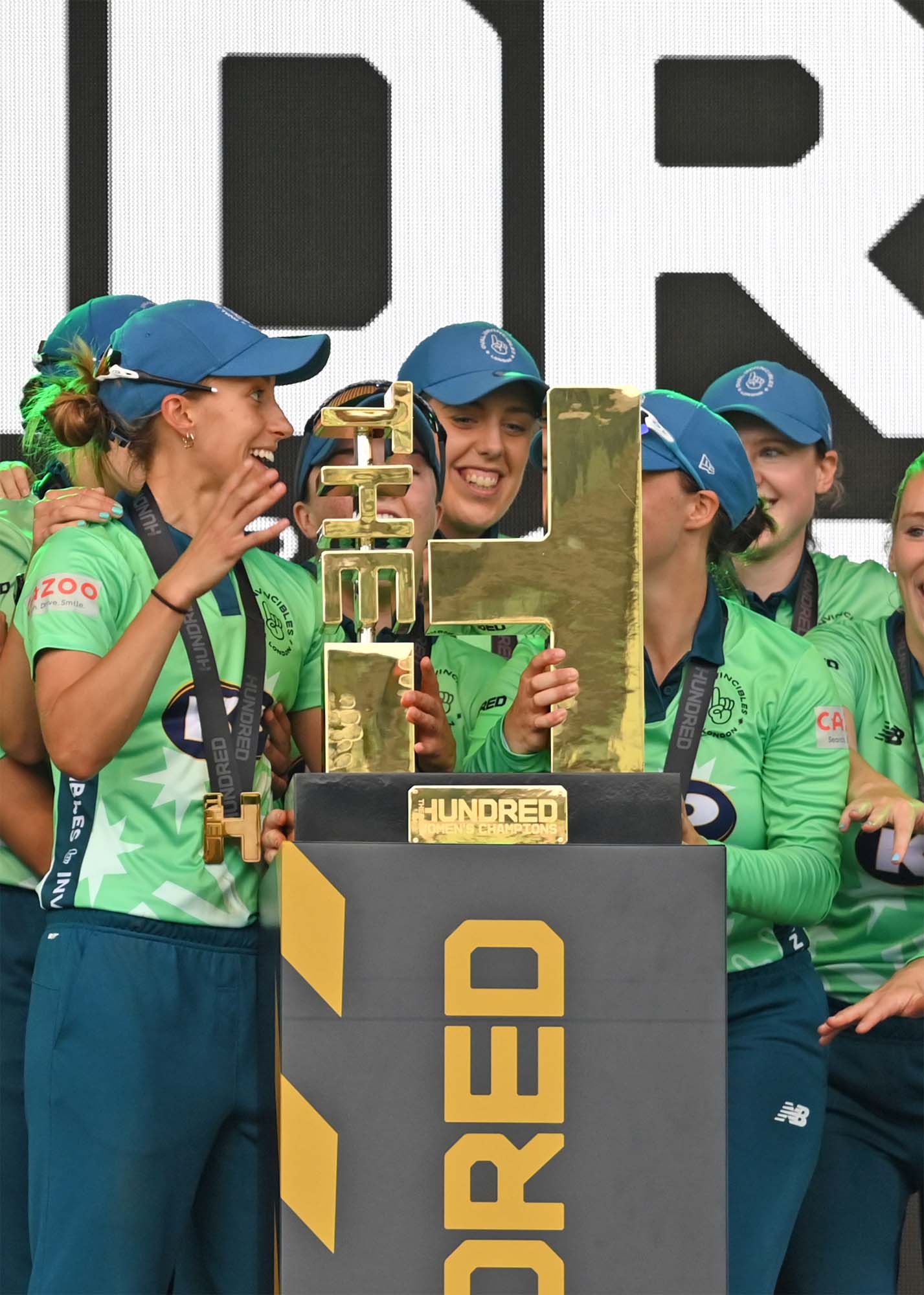 Before the inaugural tournament in 2021, it was announced that the £600,000 prize fund would be split evenly between the men’s and women’s competitions. It was, the ECB said “a step towards the long-term commitment to making cricket a gender-balanced sport”.

The crowds that poured through the gates in that opening summer were an indication of the enthusiasm and support for that move, with The Hundred, alongside the ICC World Cups and Australia’s Big Bash – both of whom have joined English cricket’s 100 ball competition in establishing pay parity as a central pillar of their philosophy – all acting as trailblazers, not just for women’s cricket but for female sport at large. The double-header matches, with the women and men sharing the same stage for an afternoon and evening of cricket and entertainment, were one of the standout attractions of the tournament’s first season.

Little wonder that when the trophies and medals were handed to the champions at Lord’s that first August in 2021, there was a familiar buzz of excitement in our London HQ. 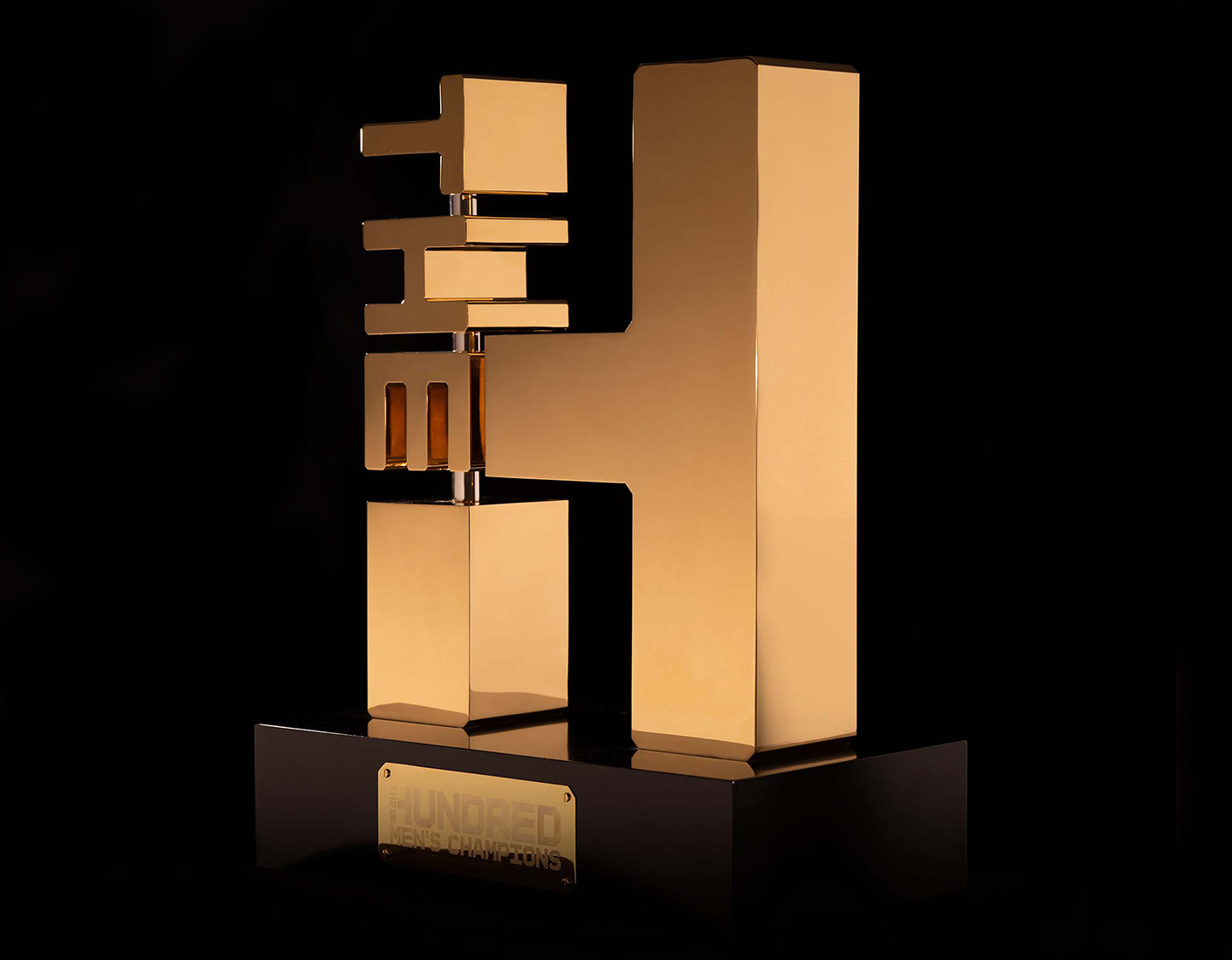 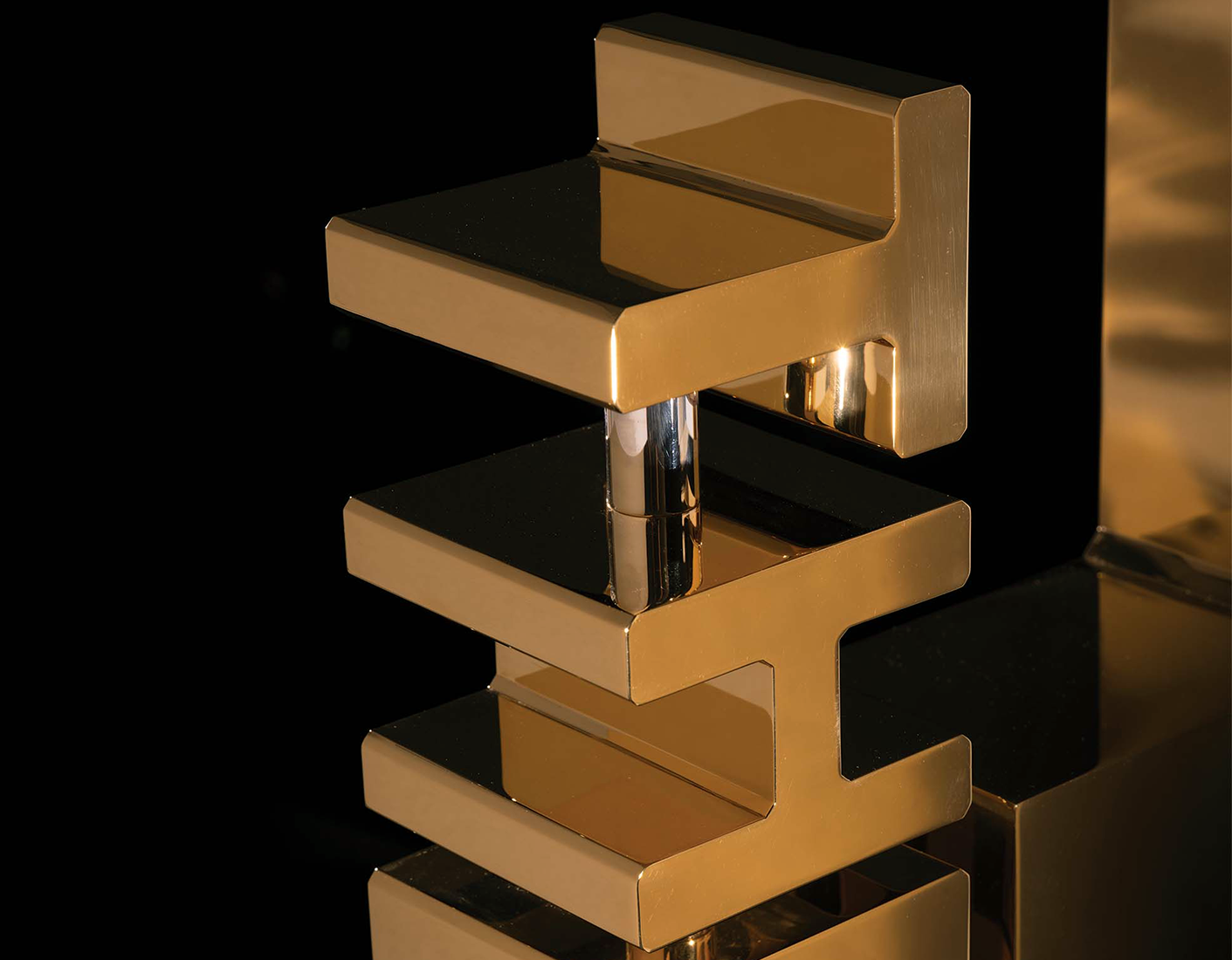 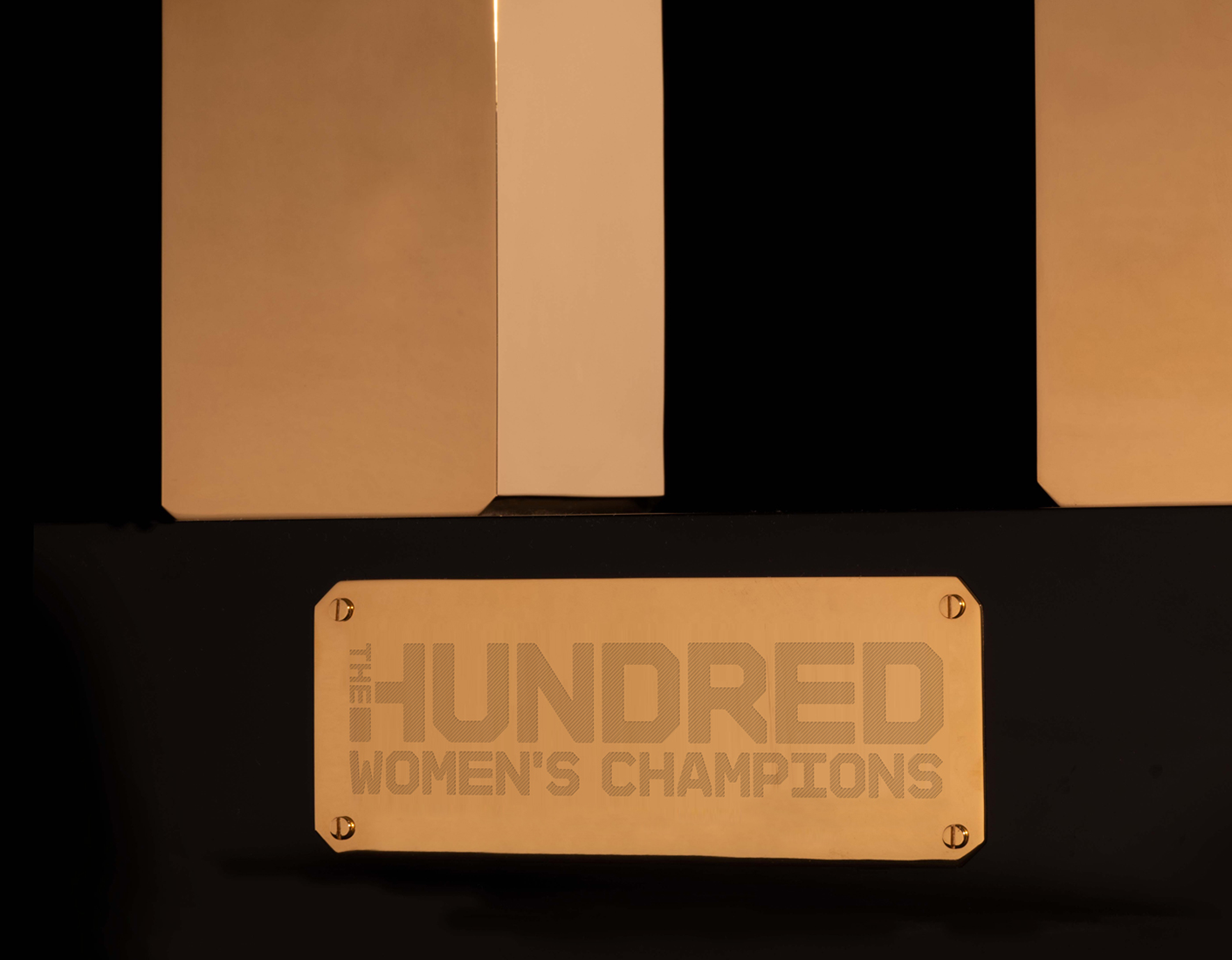 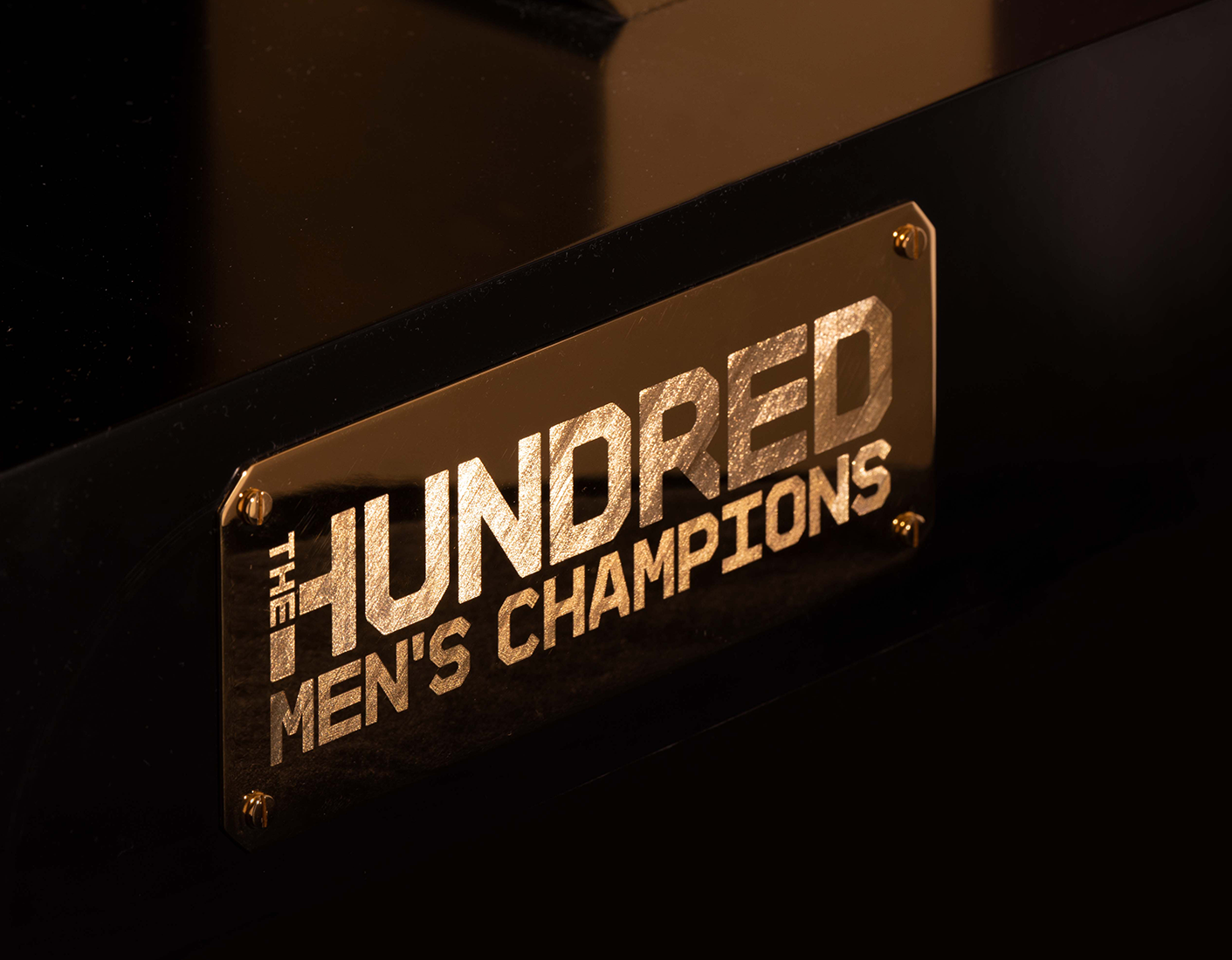 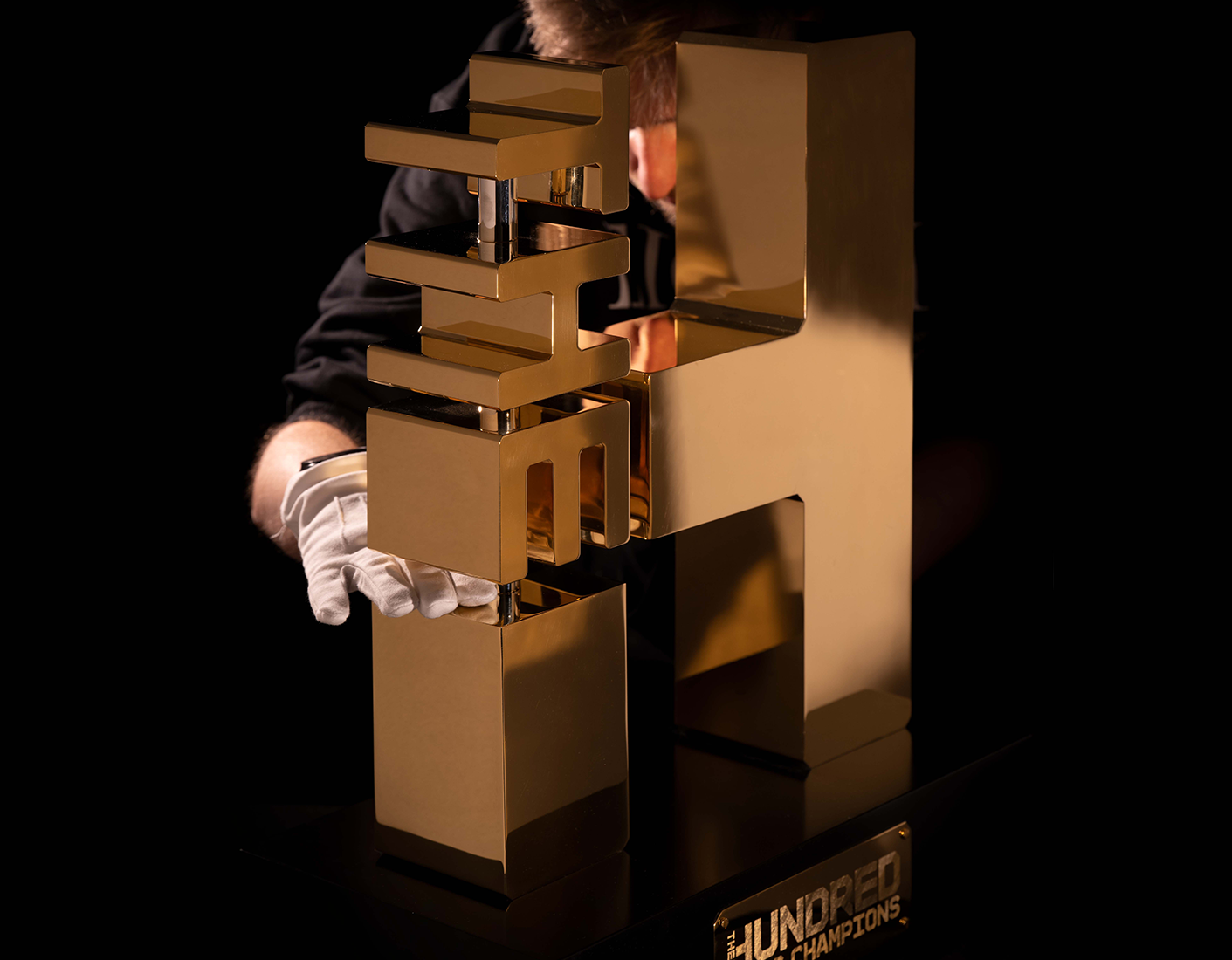 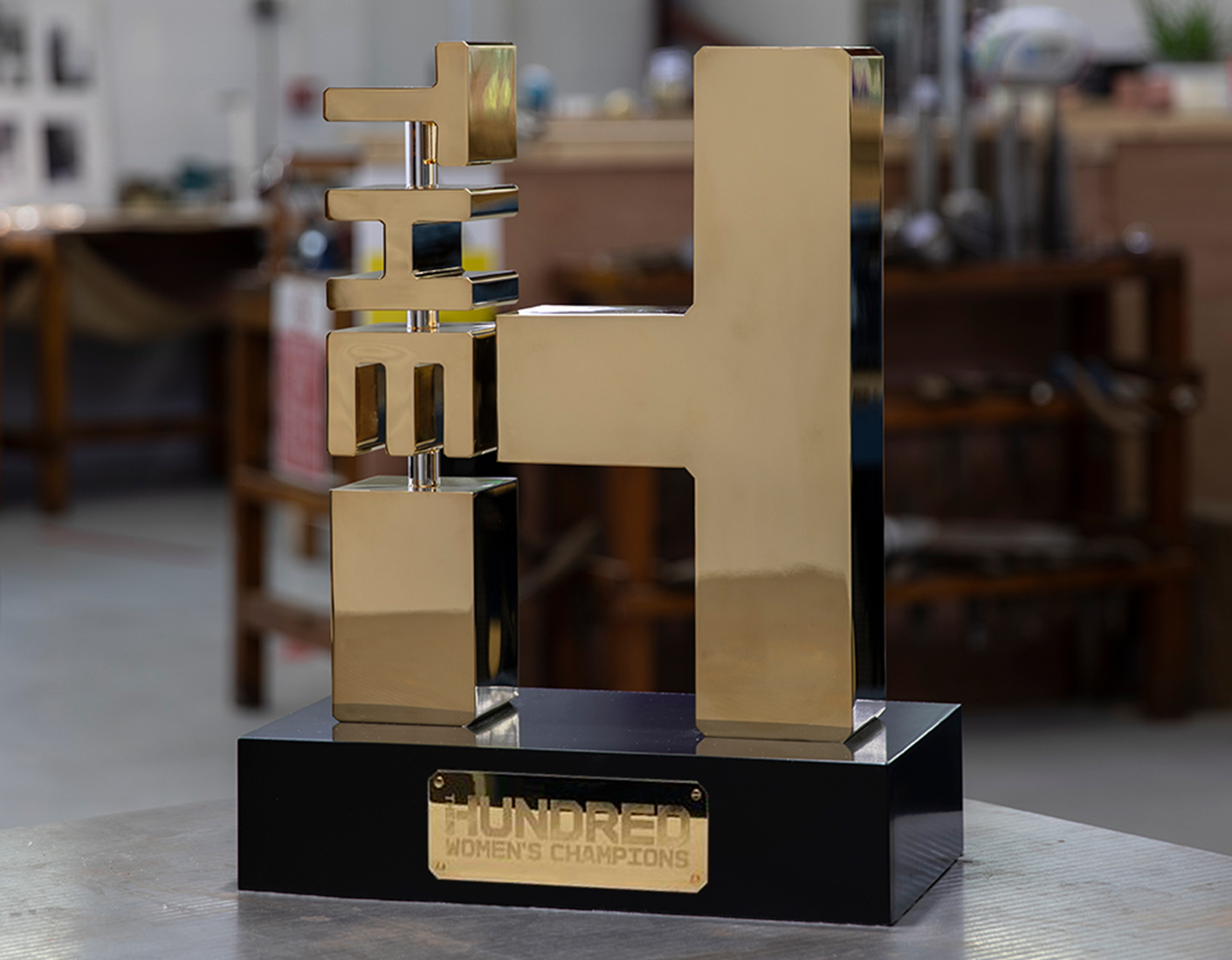 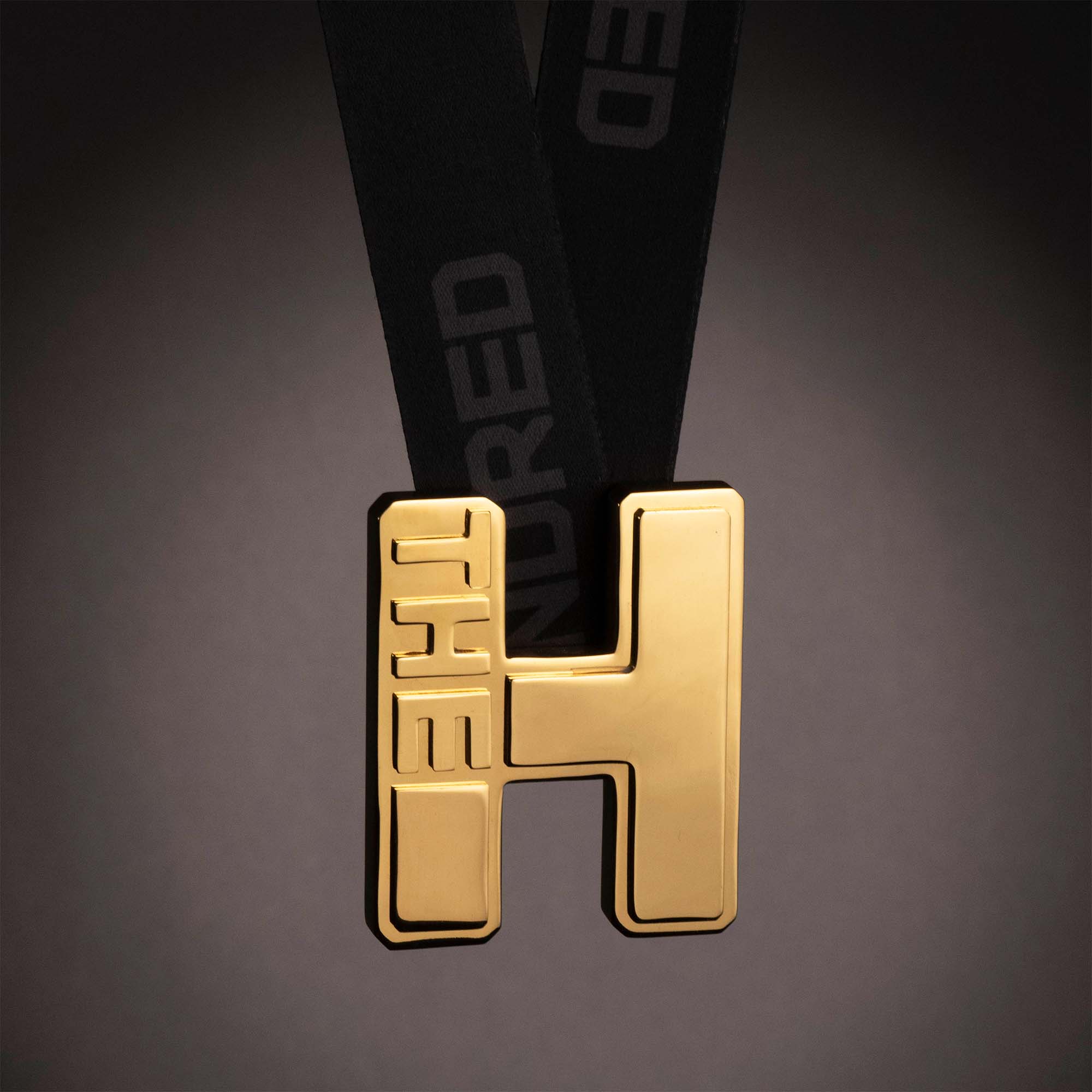 Identical, The Hundred Trophies made in London

Thomas Lyte are obviously no strangers to being inextricably linked with some of sport’s biggest prizes and iconic tournaments, a lengthy list that includes the Emirates FA Cup, the Women’s FA Cup, the Guinness Six Nations Trophy, the Women’s Six Nation Trophy and both Men’s and Women’s Rugby World Cups.

By and large, these competitions are already well-established. So, to be involved at the outset of a tournament that has already captured the imagination of the country and cricket lovers across all genders, races and ages is incredibly special.

Particularly given the amount of hard work and inspiration that went into their conception and creation in our London workshop.

Originally commissioned by the ECB in 2019, shortly before the onset of the pandemic which caused a one-year delay to the start of the competition, the two identical trophies for the men’s and women’s Hundred are among the most distinctive in modern cricket.

The Ashes trophy may be the most prestigious in the sport, but the tiny urn has got nothing on the golden blockbuster designed by Thomas Lyte’s Trevor Brown. Creating the trophy was a painstaking process, involving 190 hours of work by our design team and industry-leading silversmiths. Standing at 56cm tall and weighing just under 13kg, the prize for winning The Hundred is as memorable as any of the big hits or swinging yorkers that brought the victors the title in the first place.

In keeping with the modern approach incorporated by the brand-new format – it’s cricket but not as we’ve known it before – Thomas Lyte used a very modern approach to forge two completely identical trophies. Leaning heavily on the very latest in 3D technology, Thomas Lyte used precise measurements to engrave the templates of both onto flat sheets of brass.

Hot-forging – an age-old process utilising temperatures in excess of 700 degrees Celsius – was then used to bring these flat sheets to life. Our plating tanks then added the golden touch, before our polishers set to work to bring the trophy up to its final finish.

Due to the delay of the tournament brought on by the Covid-19 pandemic, by the time they were presented in front of a packed Lord’s crowd, they had been two years in the making.

Seeing the smiles of the winning teams and those willing them to victory from the stands, made one thing abundantly clear.

It was a worthwhile wait. 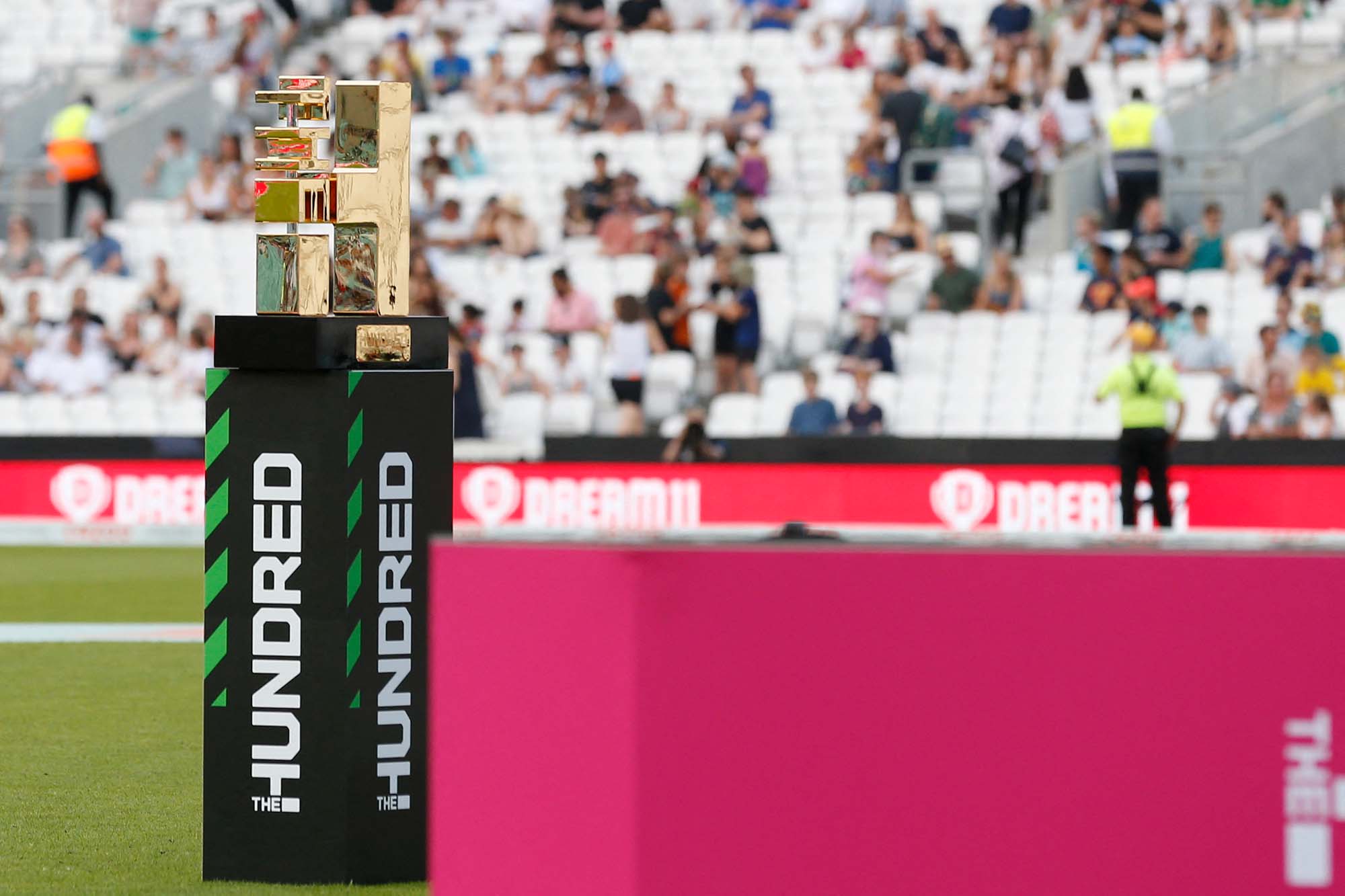