The world of cricket has been turned on its head since the crash, bang, wallop arrival of Twenty20 cricket – and now the International League T20 (ILT20) looks set to speed up the pace of change to an even greater extent. Thomas Lyte are naturally delighted to be part of that process, having designed and made the landmark new ILT20 trophy that will be fought for, for the first time early in 2023. 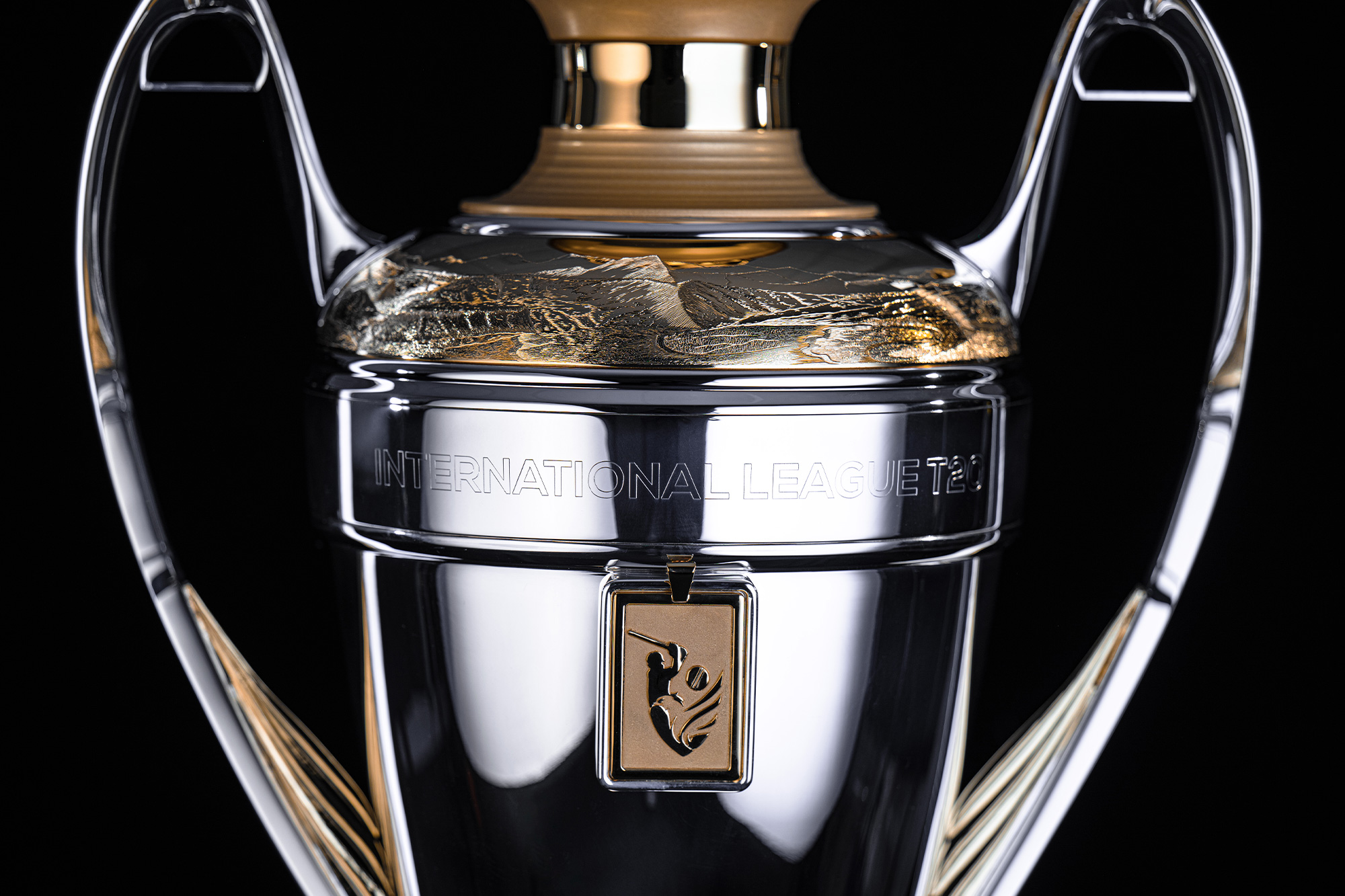 Designers and Makers of the International League T20 (ILT20) Trophy

The Queen’s silversmiths and goldsmiths, Thomas Lyte, are the official trophy suppliers to the International League T20, and the designers and makers of the ILT20 Trophy. We are delighted to continue our long-standing and close relationship with both the UAE in particular, and the Middle East region at large. Hand-crafted in our London workshop, following an exhaustive design process involving 28 different concepts, the stunning new trophy reflects the prestigious and ambitious nature of one of cricket’s flagship Twenty20 tournaments. 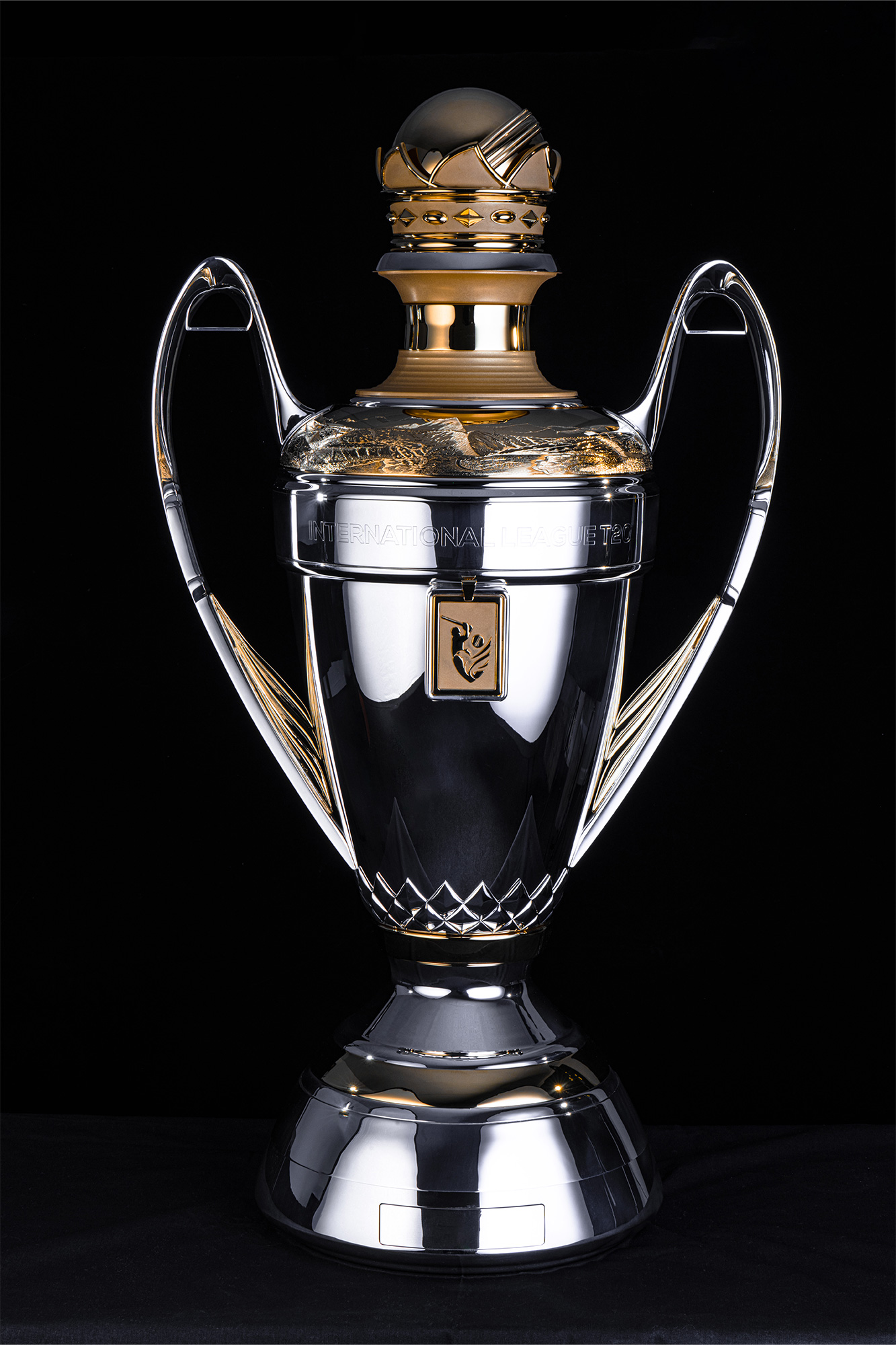 Thomas Lyte has earned their reputation as world-class trophy makers, with their London-based fine silver workshops responsible for the Emirates FA Cup, the Rugby World Cup, the ATP Finals trophies among many others. Our silversmithing and goldsmithing company’s links with the UAE and sport in the region have deep roots. So, we were naturally delighted to design and craft a stunning trophy, which includes many features synonymous with both the culture of the UAE, the Arab Peninsula and the sport itself.

The initial process continued over a number of months and involved 28 different concepts before the final design was chosen. The end result is a trophy that is directly proportional to Dubai’s iconic Burj Khalifa hotel, with its 830mm height mirroring the statue – albeit on a much smaller scale – of its towering 830m high equivalent. It’s just one small detail that shows the care and thought which has gone into its creation.

“We were utterly humbled to design and craft the International League T20 trophy. We always maintain that a great design is about a strong narrative, a really important story. The design of the ILT20 trophy has so much embedded about the United Arab Emirates and it’s deep culture and heritage. We believe it is one of the finest trophies that we have created to date.” 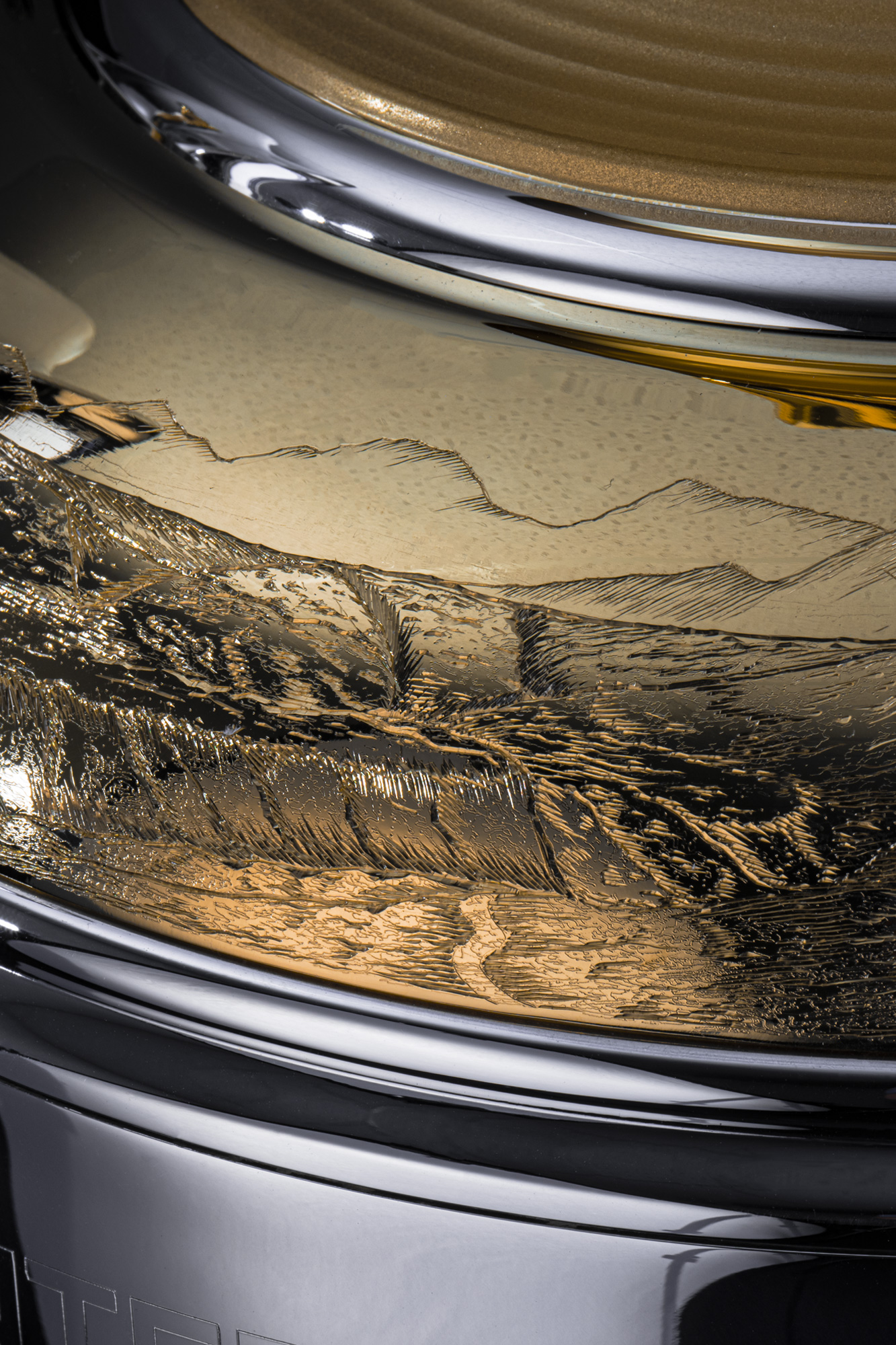 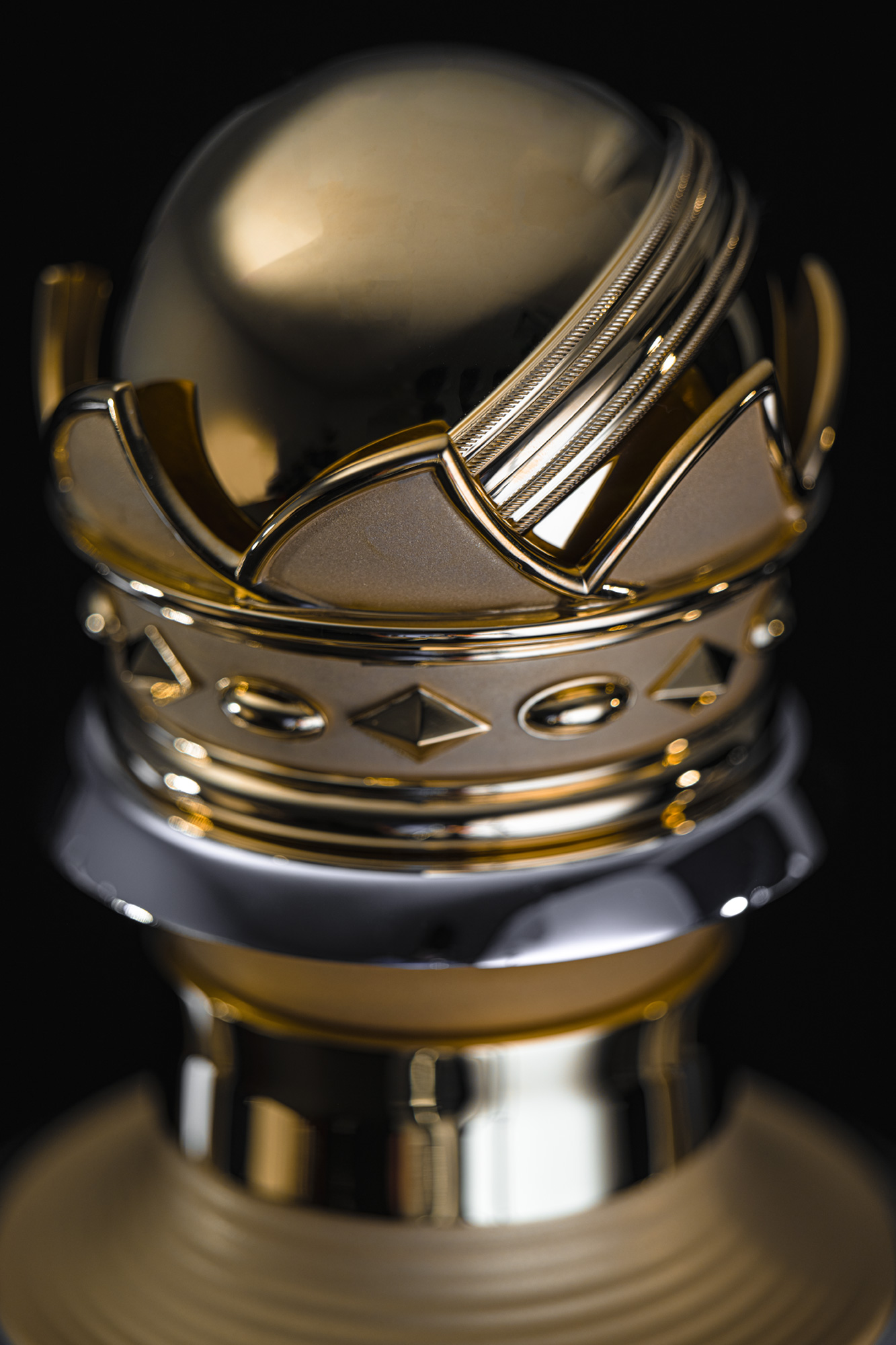 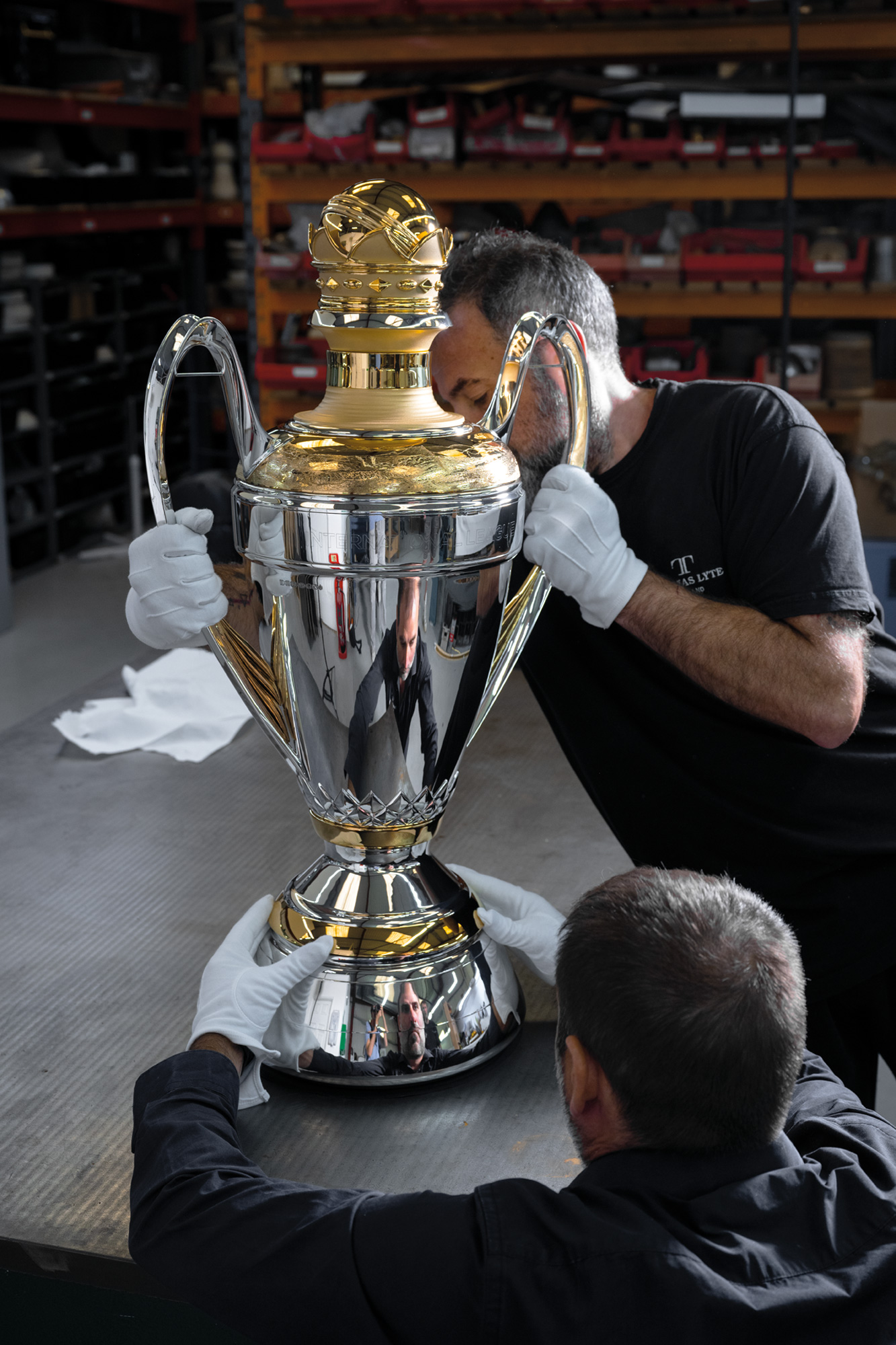 The body of the trophy is shaped in the teardrop-shaped image of a diving falcon, the national bird of the UAE. The intricate handles, meanwhile, resemble the shoulders of the bird, tucked up into a dive.  The bottom of each handle features a feather motif, while the bottom of the trophy includes a series of diamond shapes. A 24-carat gold section around its neck, which has been hand-spun and sandblasted, helps to create a sand dune effect reminiscent of those found in Tel Moreeb in Abu Dhabi’s Al Dhafra region.

Brought to life in Thomas Lyte’s London workshop, the trophy is made from sterling silver and is gold-plated. The name of the tournament – International League T20 – is machine engraved on the front of its front. The trophy took 230 hours to craft, with 30 different components coming together having been individually polished and then assembled on the final day. That painstaking work is reason alone why this trophy has already assumed a special place amongst the many others that have left our workshop bound for some of the world’s biggest and most prestigious sporting events. 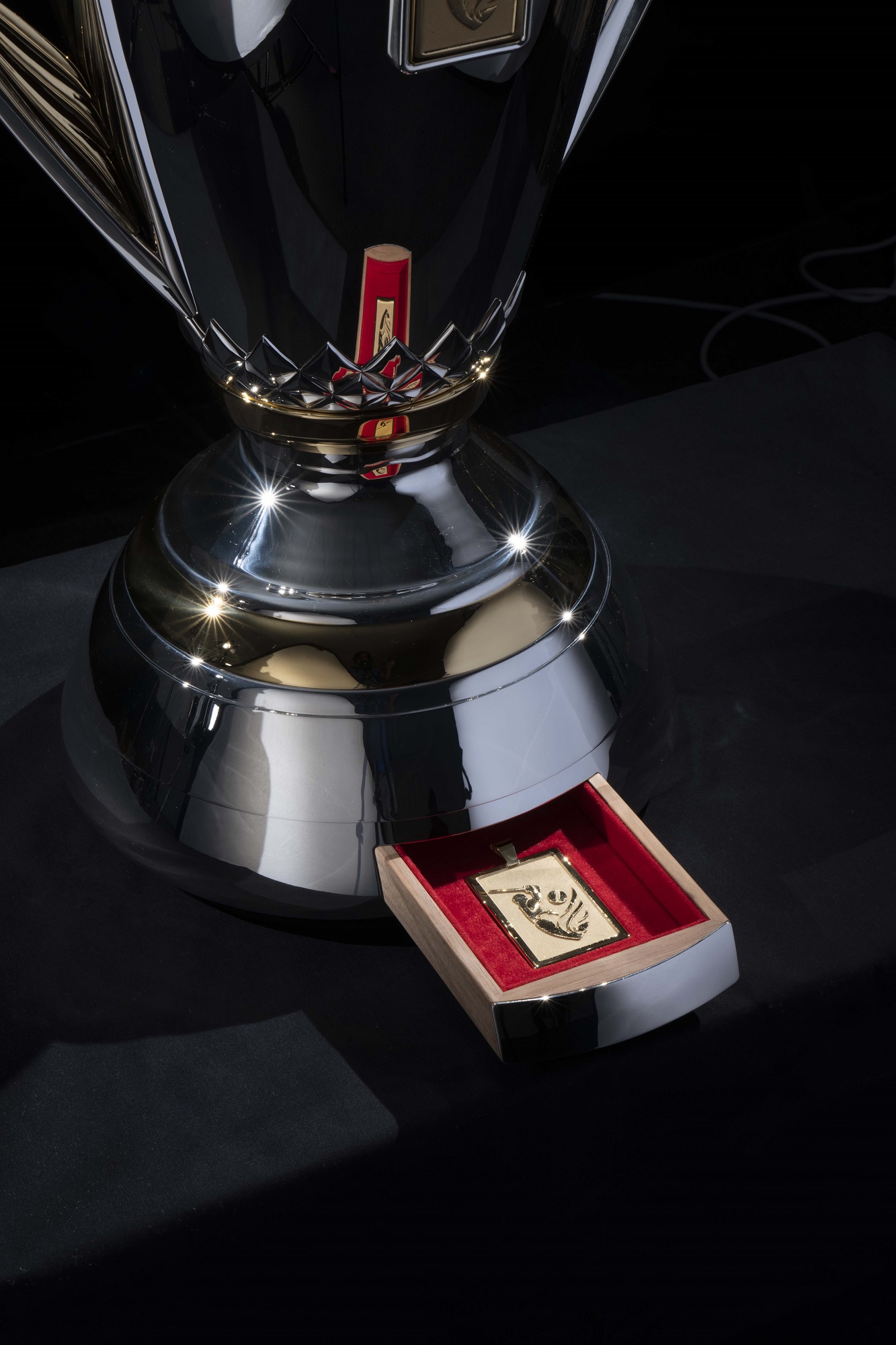 The trophy features one final surprise, with a detachable pendant on the front of the trophy, featuring the tournament logo. For one lucky fan, there’s also a second pendant contained in a drawer on the trophy’s plinth, which will be presented on the day of the final. It’s another magic touch for a trophy that contains plenty of eye-catching detail.

The ILT20 trophy unveiling in Dubai

The new ILT20 trophy was unveiled by His Highness Sheikh Nahayan Mabarak Al Nahayan, the chairman of the Emirates Cricket Board, in front of a stellar cast of cricket greats, including Brett Lee, Wasim Akram and Dwayne Bravo in a stunning ceremony in Dubai.

With the stature of the new ILT20 trophy mirroring the aims of a tournament that looks set to emerge as one of the standout events in the T20 calendar.  The winner of the six-team tournament will lift the stunning custom trophy, following a group stage and a knockout phase, both of which will attract enormous viewing figures, with cricket lovers from across the world tuning in to see which franchise comes out on top.

“The team is incredibly proud of this magnificent piece, it truly reflects the essence and the spirit of the league, and we expect it will become a much-coveted trophy which will take pride-of-place in the winning team’s (trophy) cabinet for years to come.”

A significant milestone for the world of cricket as HH Sheikh Nahayan Mabarak Al Nahayan, Minister of Tolerance and Coexistence and Chairman, Emirates Cricket Board, unveiled the coveted International League T20 trophy. pic.twitter.com/wwnwALjveh

The advent of Twenty20 cricket, first introduced in England in 2002, has changed the sport out of recognition, and delivered an entirely new and lucrative revenue stream to a game whose roots date back more than 250 years.

The first tournament in England proved to be the forerunner to an explosion of franchise-based competitions across the globe. The Indian Premier League (IPL), which was first played for in 2008, and competitions such as Australia’s Big Bash, are now firmly established in the international cricket calendar. The ILT20 looks set to prove similarly popular, bringing together the biggest stars in the sport as six franchises compete for a trophy befitting the ambition and scope of the tournament itself.

Despite the relatively recent nature of the format T20 is now, arguably, global cricket’s dominant format. Traditionally played with a white ball, T20 sees two teams compete in a match of 40 overs, with both sides given 20 overs to score as many runs as possible.

T20 has not only delivered enormous levels of excitement since its inception, it has also given rise to a range of astonishing new shots and power hitting, with batters routinely clearing the ropes to send the ball flying into packed crowds in grounds around the world. From a bowling perspective, it has also produced a new and generation of adaptable spinners as well as quick bowlers capable of sending the ball down the 22-yard track at speeds approaching 100mph.

Thomas Lyte enjoys close ties with one of the world’s most popular sports and have been involved in the design and manufacturing of trophies across cricket’s many formats. In recent years, Thomas Lyte has worked hand-in-hand with a number of governing bodies, including the ECB and the ICC to create both of the Women’s and Men’s trophies for The Hundred – the exciting new pioneering format played every summer in England – and the ICC World Test Championship, a revolutionary idea which has transformed the game’s most traditional format. Use the filtering options on our website’s trophy gallery to read more about our cricket trophy commissions. 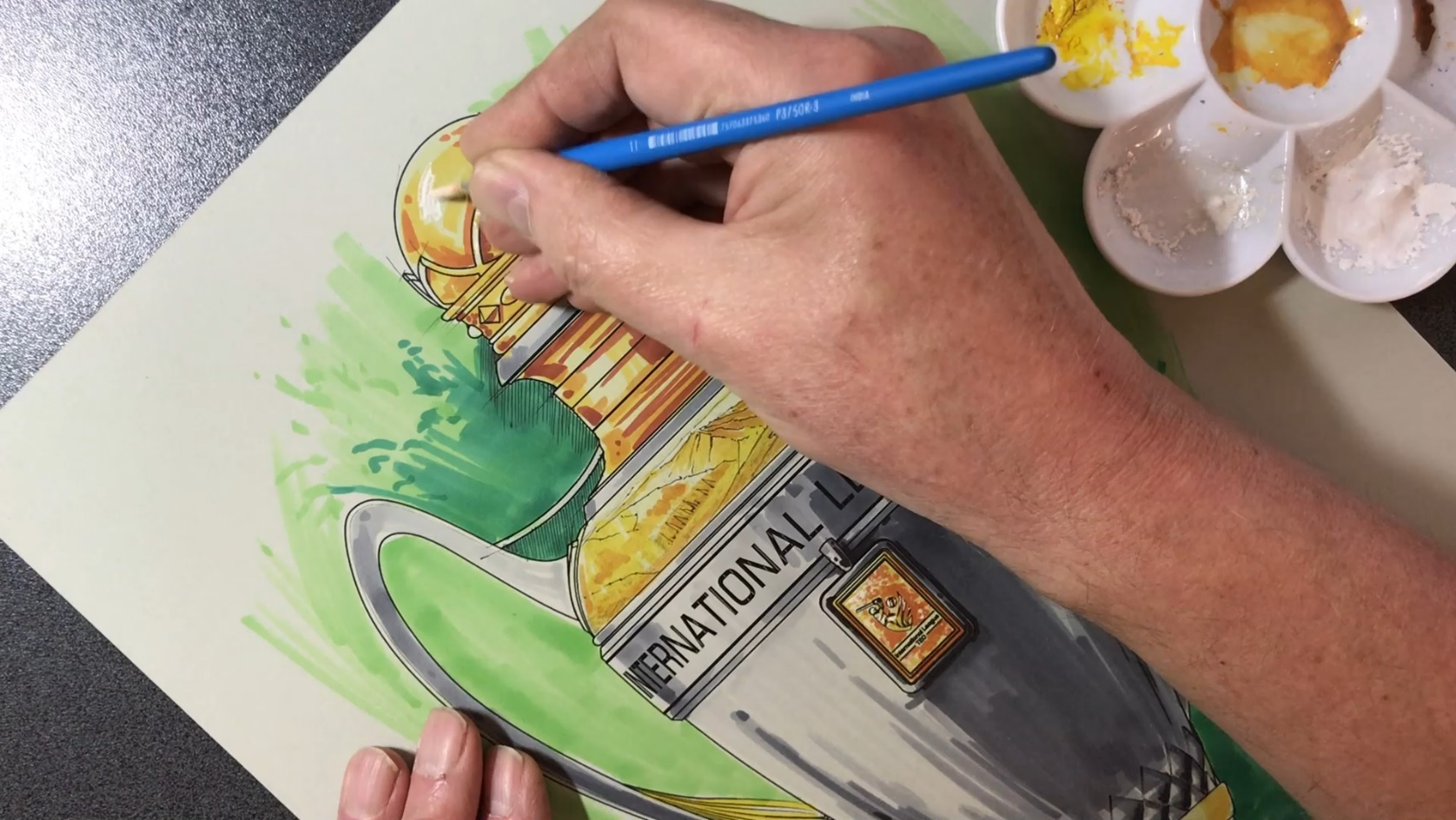 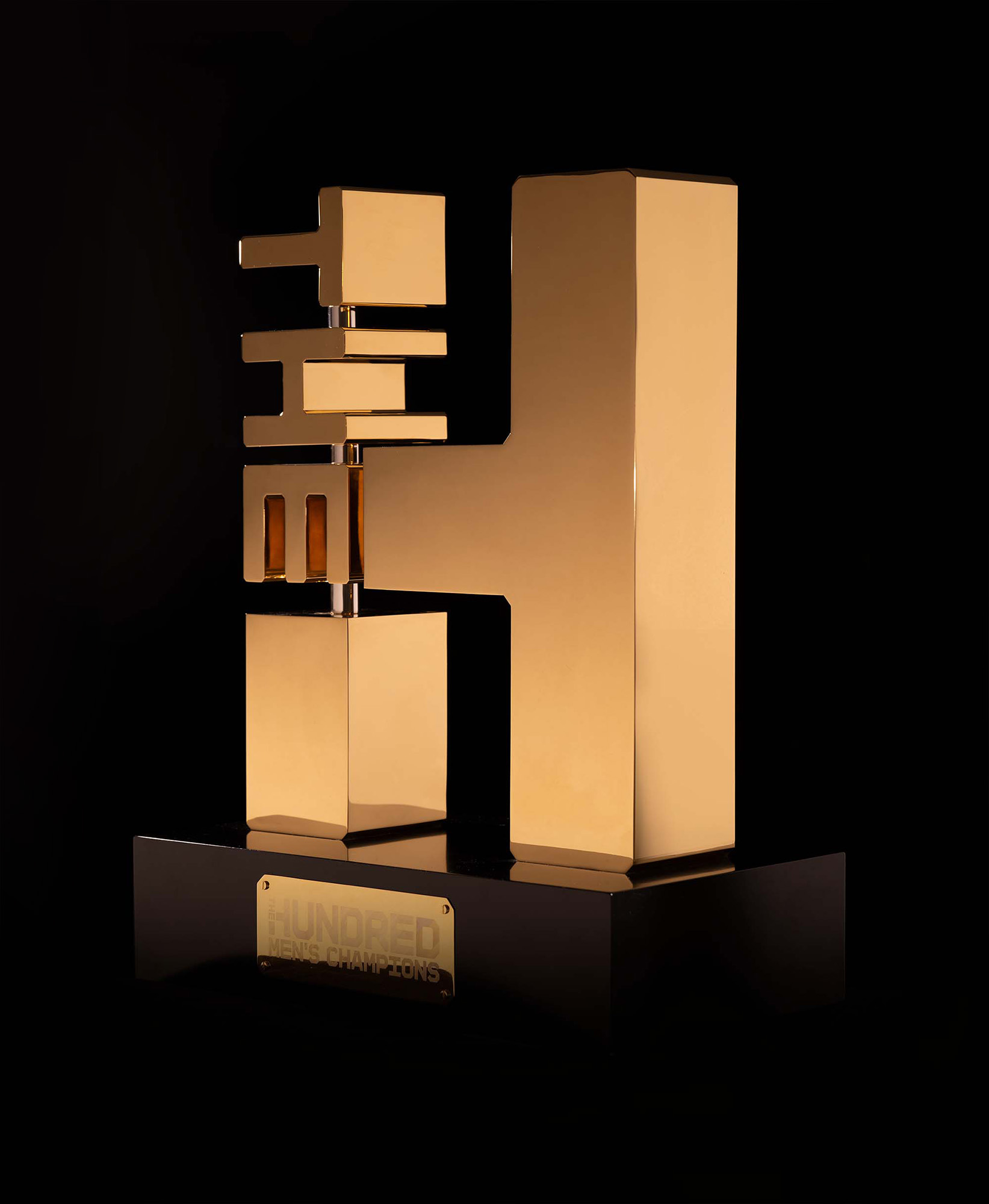 A symbol of gender equality, to inspire a new generation of cricket fans 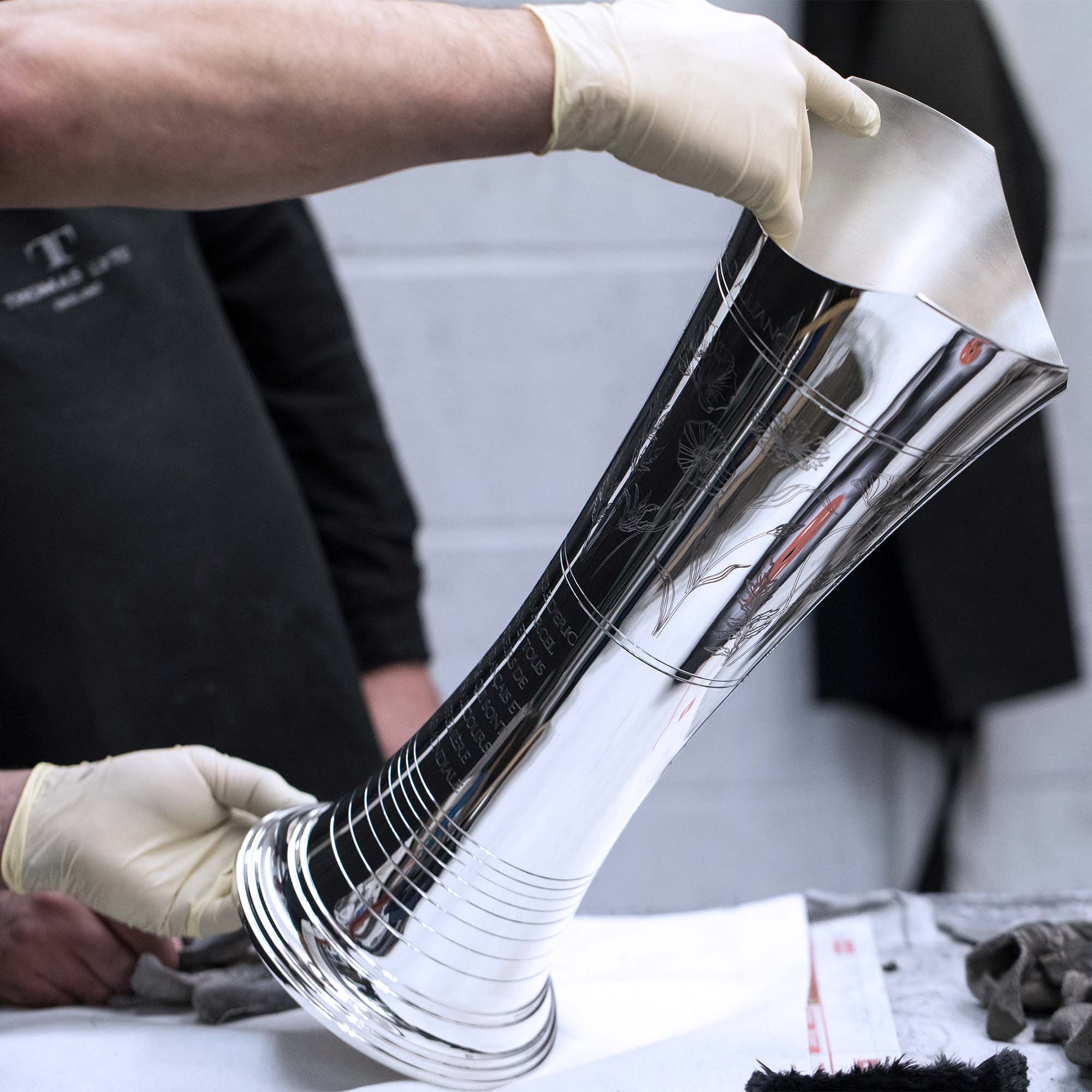 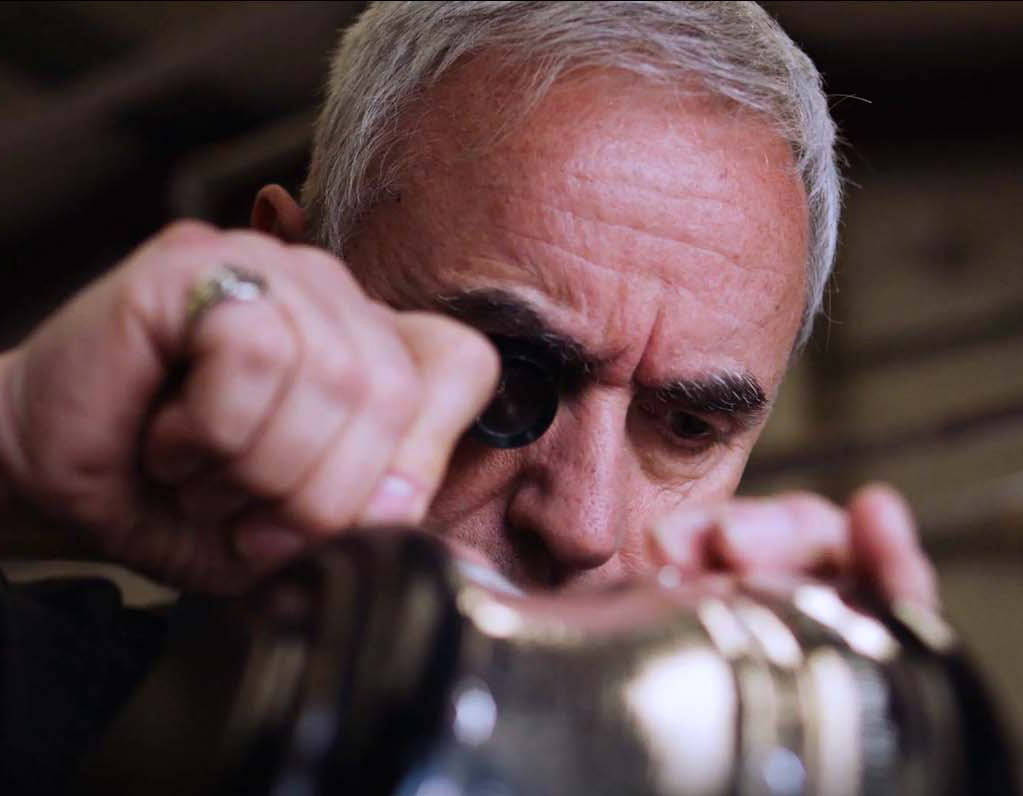 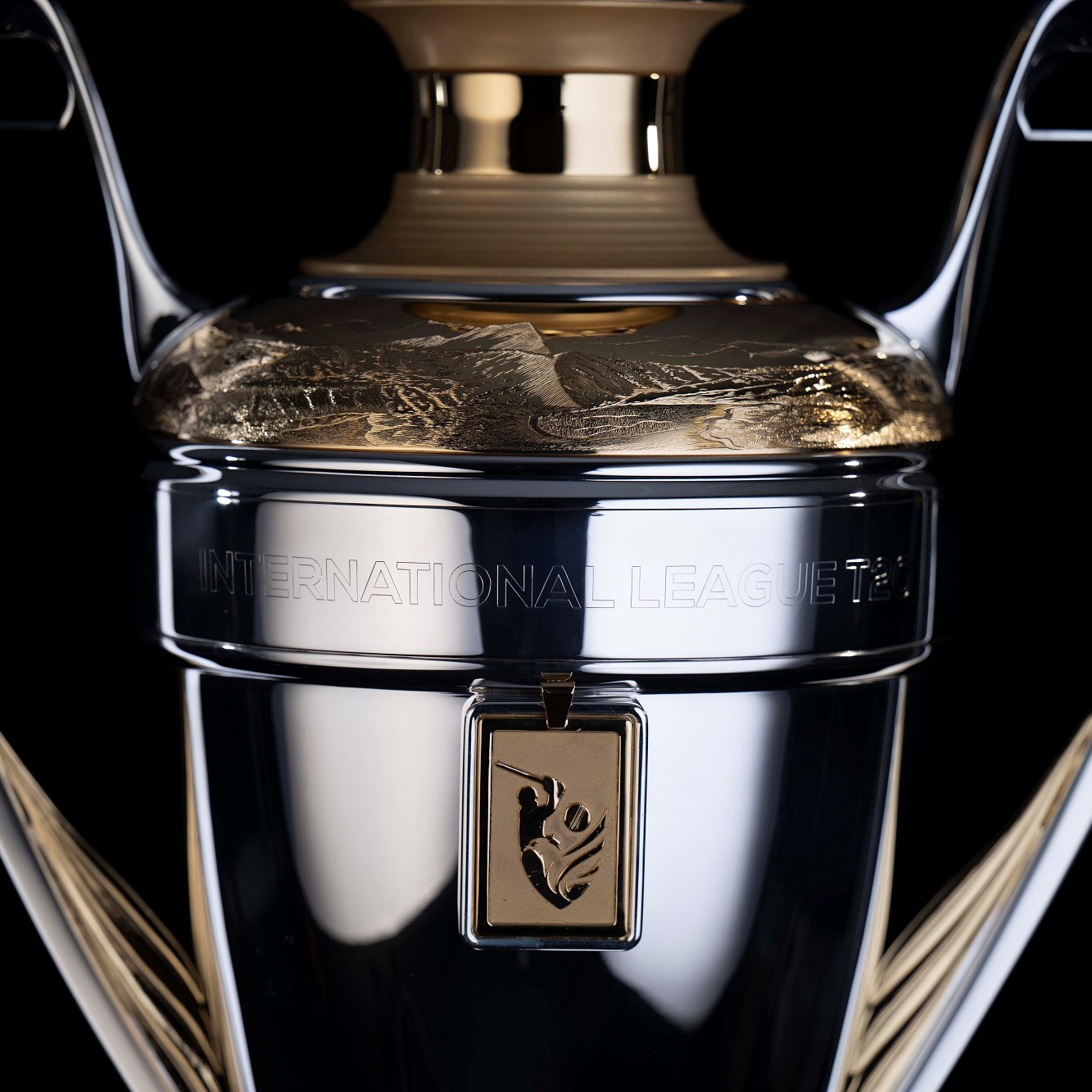 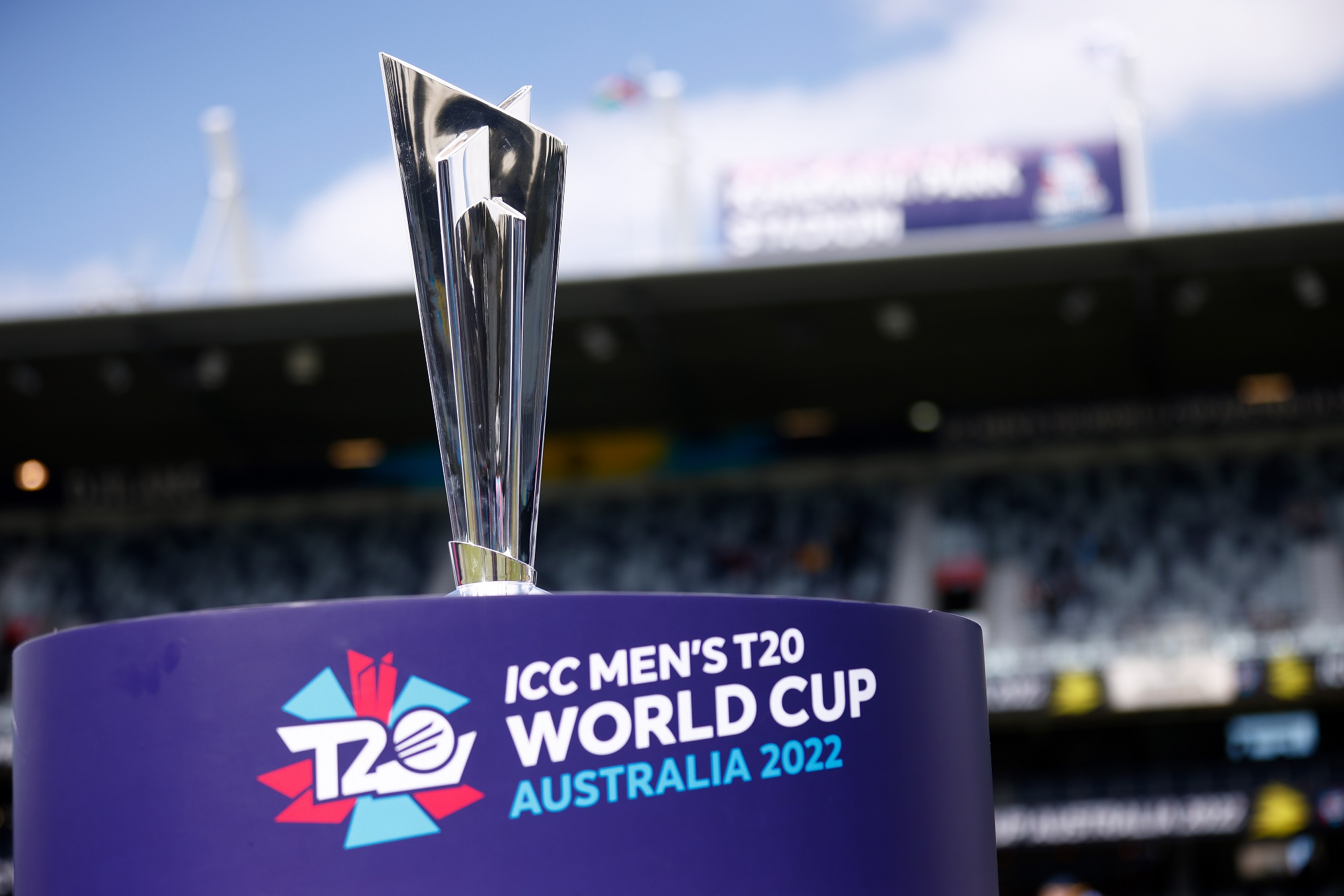 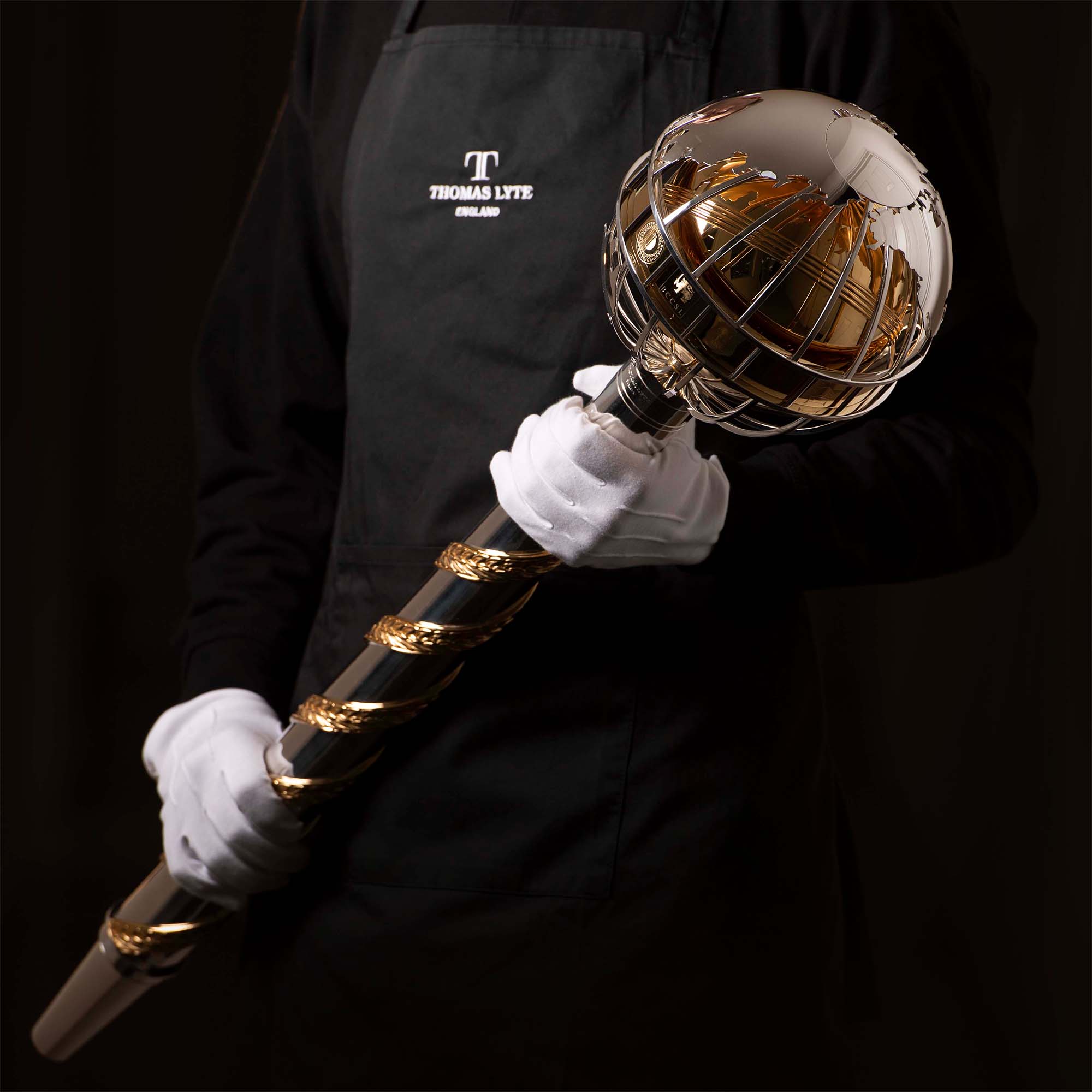 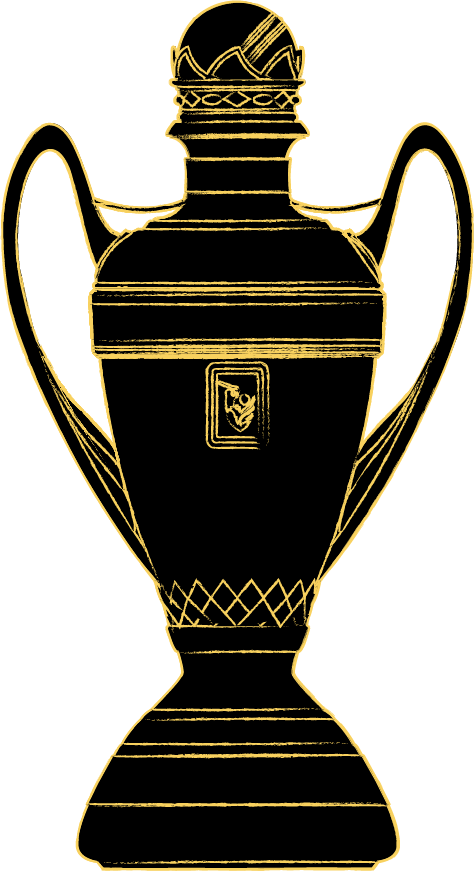 Thomas Lyte are proud to be the Official Trophy Supplier to the ILT20 and the designers and makers of the International League T20 trophy.

Take a glance at these fast facts about the stunning trophy made for the UAE’s ambitious new cricket tournament.