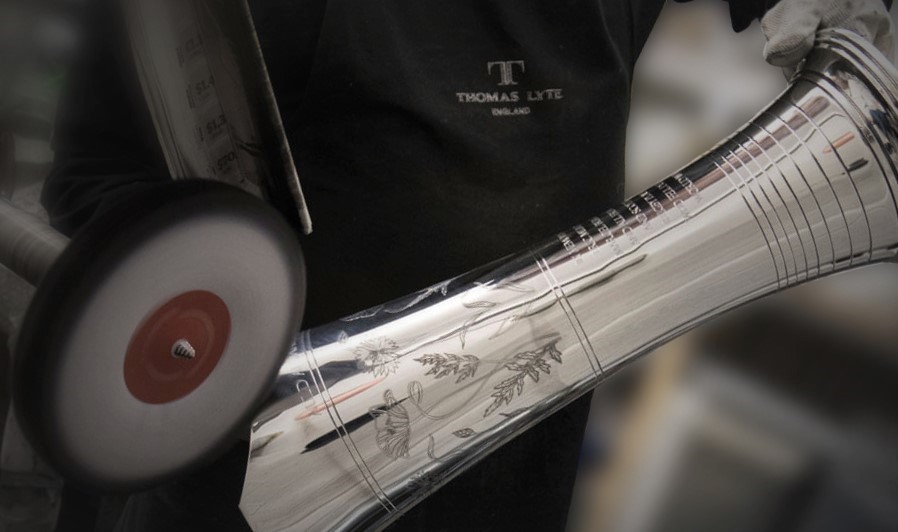 The Guinness Six Nations Rugby tournament draws to a close this evening, with the fate of not one, but two trophies to be decided.

France defeated Grand-Slam chasing Wales on Saturday thanks to a last-gasp try in what many have described as one of the greatest Championship matches of all-time, keeping their title hopes alive. They host Scotland at the Stade de France tonight, needing a bonus-point victory and a winning margin of at least 21 points to become champions for the first time since 2010.

Scotland too have a great deal to play for, with an eight-point victory enough to secure second spot in the tournament.

To add to the excitement, there is another historic title to be decided, with both sides also playing for the Auld Alliance Trophy. 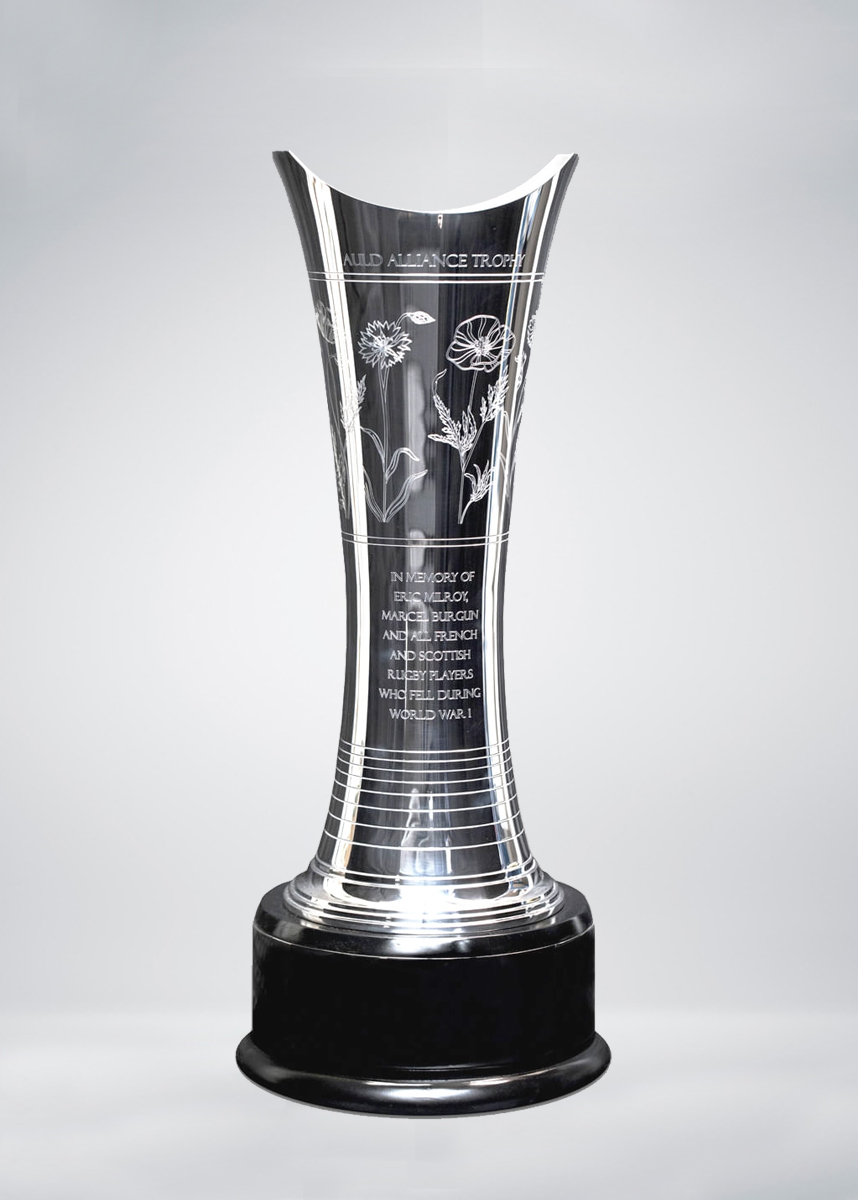 The Auld Alliance trophy was commissioned in 2018 by Scottish Rugby and the French Rugby Federation (FFR) in tribute to the courageous rugby players from the two nations who gave the ultimate sacrifice during the First World War, and to celebrate the historic relationship between Scotland and France.

It specifically commemorates the captains of the two nations in the last matches played before the First World War – Eric Milroy (Scotland) and Marcel Burgun (France), both of whom perished in the conflict.

It is also a tribute to all those who made the ultimate sacrifice. In all, 22 French and 30 Scottish internationals were killed in action, along with countless other club players from both nations.

The driving force for the creation of the trophy was Patrick Caublot from Amiens Rugby Club in France, who worked alongside David Anderson QC, a great-great nephew of Eric Milroy, in promoting the concept to both the FFR and Scottish Rugby.

The trophy is to be contested once more on Friday, 26th March at the Stade de France as Scotland take on France in the Guinness Six Nations Rugby Tournament.

The two nations first met on the rugby pitch in 1910, when the two teams played against each other in Edinburgh. Scotland won the match 27–0. Since then there have been a total of 97 games played, resulting in 56 wins for France, 38 wins for Scotland and 3 draws.

One of the most remarkable matches in the history of international rugby took place between the two sides in Paris on 1st January 1920. This was not only the first official international played after the First World War, it was also the first time back in country colours for a number of players on both sides after serving during the conflict.

French sources have christened this meeting “Le match des borgnes”, as it is believed that five of the 30 players on the field lost an eye in the war. The match was played in mud and driving rain, with Scotland winning 5-0.

Since the creation of the Auld Alliance Trophy, there have been three meetings of the two teams, with Scotland winning twice and France once, with a total of 70 points scored by each side, so expectations are high for a competitive and exciting match.

The Auld Alliance Trophy was designed and made by world-renowned trophy makers Thomas Lyte. Using traditional silversmithing and goldsmithing skills combined with leading-edge modern methods, the team at Thomas Lyte are experts in the fields of custom trophy design and manufacture, and is responsible for some of the world’s most iconic sporting trophies, including the Rugby World Cup’s Webb Ellis trophy, the Emirates FA Cup, the Davis Cup trophy and the Guinness Six Nations trophy. 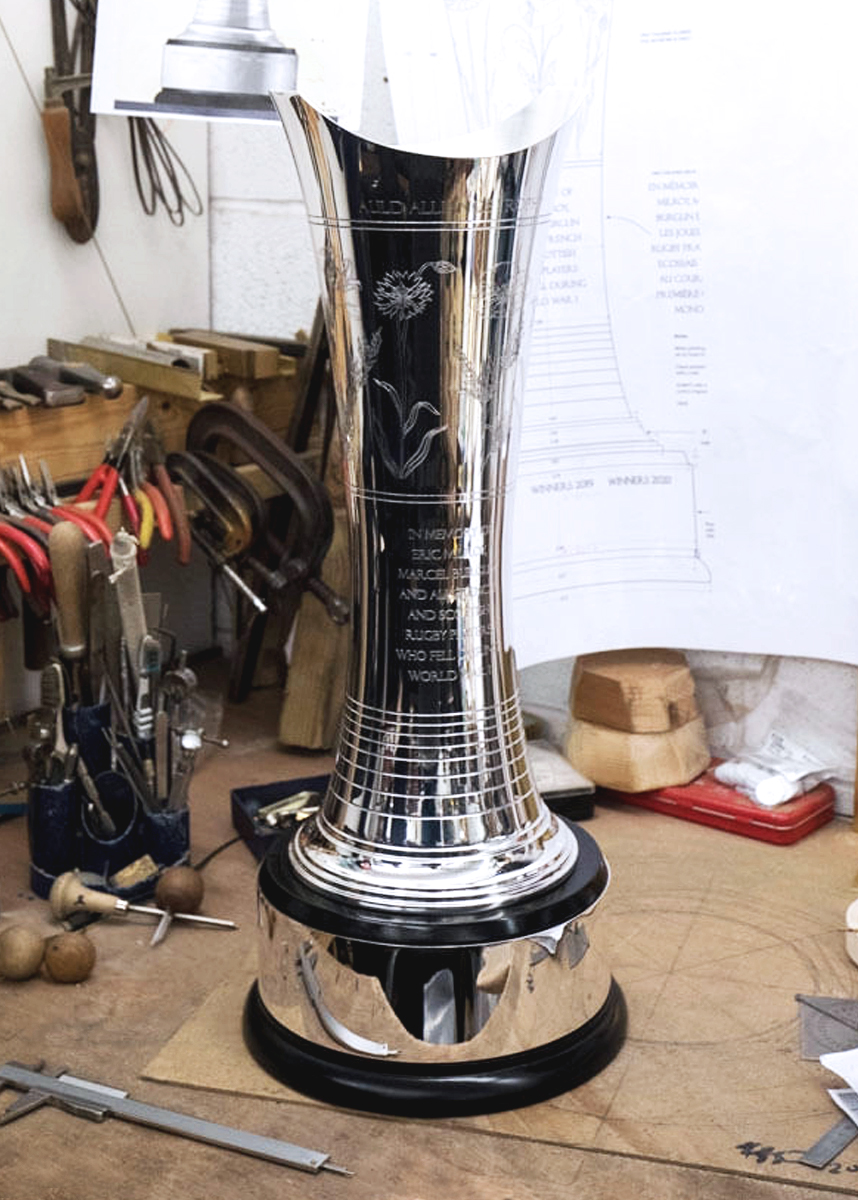 The trophy stands at an impressive 60cm in height and was hand spun from hallmarked Sterling Silver, requiring a total of 110 craft hours to create. The contemporary sweeping form of the trophy rises up in remembrance, while the clipped edge refers to lives so tragically cut short. Around the trophy is a band of poppies and cornflowers, exquisitely engraved in line form to encourage a closer look, while the bright mirror finish applied patiently to the sterling silver surface allows for personal reflection as we remember all those who fell.

“The Auld Alliance Trophy is a very significant commission for Thomas Lyte, commemorating an immensely sad time in our history, while celebrating one of rugby’s great contests”

“This trophy is a magnificent symbol of considered craft. I have no doubt the whole Thomas Lyte team will be watching with pride tonight, with the incredible opportunity to see this wonderful trophy lifted alongside perhaps one of our most famous trophy commissions, the Guinness Six Nations trophy itself”.